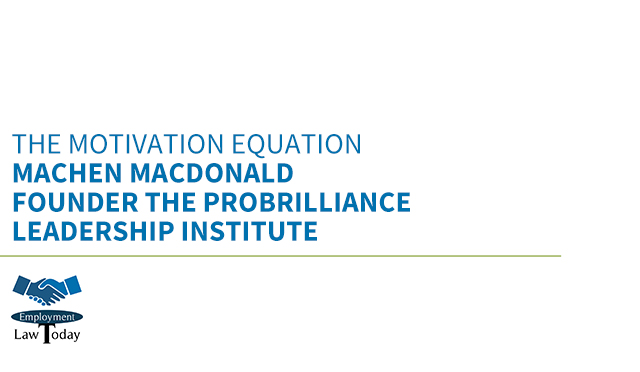 The audience of business owners, managers, and employers will learn how to distinguish a dysfunctional leadership approach from a successful one, and will further learn how to use the “Motivation Equation” to boost employee morale and enhance their workplace.

Employers need good leadership to drive employee success, improve productivity, and decrease employee turnover. To be a good leader, an employer or manager must foster good communication with their employees. What happens when employers and employees are not clear on their respective needs? How can we, as employers, teach employees by example to clearly express what they need from the employer/employee relationship?

My next guest, Machen MacDonald, strategic growth consultant and Founder of the ProBrilliance Leadership Institute, will discuss and contrast a dysfunctional leadership approach with a successful one.

Join us as we discuss what Machen calls “The Motivation Equation”, and learn how this applies to your company’s success!

0:55 – 14:49 – Eric introduces his guest, Machen MacDonald as well as the topic for tonight’s episode. Machen is the Founder of the ProBrilliance Leadership Institute. He is also a #1 best-selling author and creator of the highly successful Power of Coaching book series. Machen says that right out of college, he started a water ski school and started a different service leading him into financial services. Machen earned his license to then become a financial advisor and agency manager. He was also able to help others outside the company he worked for in regards to growing businesses. He found that most people were looking for tools and resources to become better versions of themselves; specifically looking at communicating better with others and themselves. Machen talks about dysfunction in businesses due to poor communication. He also discusses common mistakes employers make in their leadership styles. Machen also mentions situational leadership and how leaders were different “hats” for different situations.

17:03 – 30:59 – Eric asks Machen about the five dysfunctions of a team. Machen says that this comes from a book called The Five Dysfunctions of a Team by Patrick Lencioni. The first one Machen says is lack of trust. Then there is being conflict proficient. The next level is to have clear agreements to hold people accountable which is the next level. Then there is inattentiveness to results which is the final kind of dysfunction. He describes communication as an infinity sign as we always either give or receive information. Machen also mentions the book Man’s Search for Meaning by Viktor Frankl who was a psychologist. One of the things that Viktor says as Machen talks about is that there is a stimulus and our response. In communication, we make up the meaning of the words said to us or actions. We interpret things that may be different from what’s really intended. Machen says that this is the gap between the stimulus and response, even if its a nano second. We may not be able to control the stimulus, but we have the power to choose the healthiest perspective in what we fill the gap in with. Overall, the four steps on healthier communication are mentioning the stimulus or situation, what you’re feeling, what you need and then the request.

33:04 – 46:47 – Eric asks Machen about something he calls the responsibility game. Machen says imagine on a piece of paper the word responsibility written. If you break it apart it’s “respond with ability”. We all have a capability or ability to be able to do something. The degree to which that gap exists, people can struggle. Below this is fear of not being able to accomplish something or get our needs met. He says that when we drop below “our line”, we rationalize. When you break it into two, Machen says we tell “rational-lies” on why we couldn’t respond with all of our ability. The other area is blame; making others responsible for us not responding with our ability. He says that when you break the word blame down, it sounds like “be lame”. In this case, people may hold themselves in a less-than posture. The last word he uses is “shame”. He says when you put the first letter of each word together (rationalize, blame, shame), you get “RBS” or “our-bs”. This is what keeps usfrom responding with our ability. Machen wants to help people with this game to become aware of when they are dropping below the line. They also discuss some challenges in this process.

49:17 – 57:53 – Eric and Machen talk about the “motivation equation.” He says that its motivation = values x expectancy divided by distractions x delay. He says that it’s looking at hierarchy of values, then looking at the project or work at hand and connecting this to the person’s values. Expectancy is understanding whether one sees themselves capable of getting something done. The distractions and delay can be a long deadline for a project for example. There is no motivation to keep going and someone can get tangled up in this. For distractions, there can be things pulling us away that we think are important but may not be as we see it. Eric also mentions a point that with a long timeline for a deadline, one may put their work off for another week, and “that week may never come.” Before wrapping up, Eric thanks Machen for this great conversation. You can visit findmachen.com to connect with Machen MacDonald!