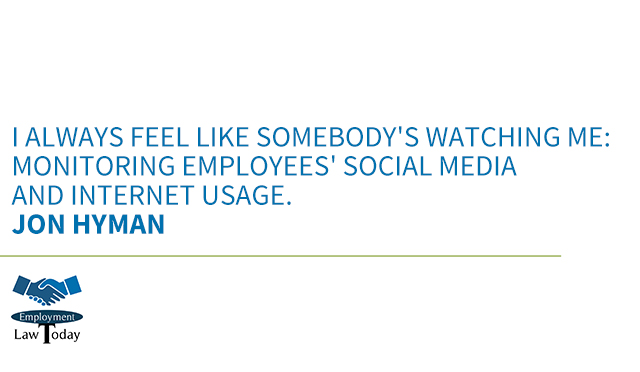 The audience (business owners) will learn what types of monitoring of their employees’ computer use and social media use is and is not acceptable, what advanced notice must be given to workers of monitoring/surveillance, and will further learn when an employee’s social media posts about work are protected, even when offensive to the company or to you, the boss.

Many states and municipalities are passing laws about an employer’s right to surveillance of their employees’ social media posts, internet searches, and computer use while on the job. With the increase in a remote workforce and many employees logging in to work from the privacy of their own homes, these rules around notifying employees of their electronic monitoring can get quite complicated.

In this episode, fellow employment law attorney Jon Hyman, Esq, and I will discuss which labor and employment laws come into play when it comes to monitoring an employee. We will address what the law says about an employer responding to employees’ social media usage outside of working hours and will address any protections of employees’ speech that may come into play under the NLRA and other laws.

Tune in Tuesday, September 13 for every employer’s must-see episode!

0:55 – 14:04 – Eric welcomes his guest, fellow employment law attorney Jon Hyman! Jon is a shareholder and director at Wickens Herzer Panza, a law firm in Northeast Ohio. He is a chairperson of the firm’s Employment and Labor practice group. Jon is also one of the co-founders and co-practice group leaders of the Firm’s Craft Beer practice. He helps brewers, brew pubs and restaurants, and businesses that serve the craft beer industry. Eric also introduces tonight’s topic which is about monitoring employees’ social media and internet use. Jon says that he somewhat fell into the world of employment law. He started at an employment law boutique right out of law school and has done employment law for the past 25 years. He says that the workplace to him is a fascinating area of the law to practice as the workplace is a place we spend more time in and there’s a relationship between employees and employers. The law that regulates this relationship is something he finds to be fascinating. As for craft beer, he mentions this as just working on something else that he loves which has developed since the pandemic.

16:18 – 29:07 – Eric and Jon talk about the legal rights and conditions as well as limitations employers have to monitor employees’ computer and internet use. Jon says that if it’s on a device owned by the employer, then their right to monitor the traffic that goes through the devices is very broad. Some states have regulations requiring notices like in California. But overall, employers can do what they want with their equipment and don’t really require to give notice about this. For Jon, if he’s drafting a handbook or policy for an employer, he’ll put a notice anyway as he feels like it’s important for the employer and employee to be on the same page on what is being monitored. Eric and Jon believe that there is a tremendous misconception around privacy rights that employees have or don’t have. Jon says that your time as an employee belongs to the employer and although some businesses have different regulations, it’s not illegal for employers to heavily monitor employees. Jon makes a point that if someone wants to spend 5 minutes to see what’s going on on Facebook or CNN, as an employer, it wouldn’t matter to him as long as they’re doing their job and getting it done. Unfortunately this isn’t the vase for all employers. They also address other privacy concerns like surveillance cameras on the work computer that can happen at the employees home.

31:07 – 46:02 – Jon and Eric mention time and hourly wages coming into light as a big issue even now with remote work. Eric gives an example of an employer emailing or texting their employee after their work hours asking them to respond to messages or get something done. This would be time that should be counted but it may not be seen as such with every employer. For Jon, he believes that all of this comes down to trust. He says that if you don’t trust your employees to get the job done, you need to take a step back and take a look at why you may not be trusting your employees and what’s the underlying issue. Eric mentions different scenarios of whether it may be low pay, unrewarding, low motivation, unrealistic expectations and more for reasons employees may be doing non related work activities. Jon questions: how far can one go to ensure that your employees are doing their work 24/7 during their work hours? Eric also brings up the concern of what an employer might want to be careful about when responding to what they see such as a social media post from an employee that may have some expression of anger or other issues in the workplace. Jon says that employees have the right under the National Labor Relations Act, to talk among themselves about the workplace. Jon mentions that in this era of technology, if an employer sees what employees are talking about online, it gives them the opportunity to fix some of the issues instead of taking it in negatively.

48:01 – 57:47 – After the final break, Eric asks Jon about some unique approaches that he and Wickens Herzer Panza take when providing employment law services and how they stand out. Jon says that being a smaller firm, it allows them to know their clients and businesses a little more. This also allows them to be more flexible. He says that they’re in the process of rolling out subscription services that allow employers to receive services like investigations, handbooks and other services. He also mentions the way his clients view him as he doesn’t just give them options, but he guides them to make their decisions to help their business. Jon says that he likes to view himself as a business partner with his clients. You can contact Jon Hyman on Linkedin as Jonathan Hyman, Twitter, ohioemployerlawblog.com and more.