FRANCHISING IN THE PANDEMIC 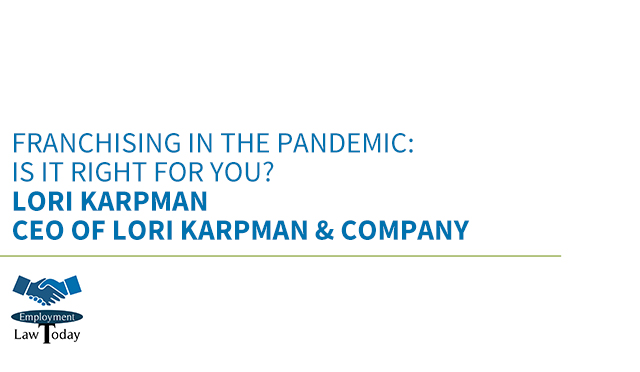 With the Covid-19 pandemic’s upheaval of the workforce as we once knew it, many mid-level and semi-senior employees are contemplating their next business move. Some may have lost jobs during or after the pandemic, or due to economic hardship. Others may have felt the sting of dissatisfaction with their long-time positions or careers, as reflected by the statistics around The Great Resignation.

With many employees longing for more independence and autonomy, yet unsure if they want to risk being fully self-employed, being a franchisee (franchise owner) could be an excellent new path.

What are the personality traits, marketing considerations, and legal and practical factors for potential franchisees to consider? Our guest tonight, Lori Karpman, will discuss how to determine whether franchising may be a good fit for you!

0:56 – 14:50 – Eric welcomes his guest, Lori Karpman, founder and CEO of Lori Karpman & Company. He also introduced tonight’s topic surrounding franchising in the pandemic and whether it’s a good fit for you. Lori is the CEO of a full service management consulting, legal services, and business coaching firm. She has also been voted one of North America’s most outstanding management consultants. Lori started out her career as a tax lawyer. She later worked for a multi billion dollar Canadian corporation who owned three different businesses that used the franchise model. This is where she learned about franchising. Lori took this knowledge and created a chain of restaurants. She franchised them and sold them. Her deep interest in this area made her open her own firm to work with those who want to franchise their business or buy a franchise. Lori speaks about how franchising has been affected by the pandemic. One way it has been affected is that more people want to be financially independent and be more in control of one’s destiny. Lori and Eric talk about how the thing with franchising is that there is freedom with accountability.

17:05 – 30:34 – Eric and Lori continue talking about accountability being a franchisor. Lori mentions that franchisors are very careful that they don’t get involved in anything between the franchisee and their employees. Eric explains the joint employer rule which is that if the franchisee violates a labor law, the franchisor may have to be responsible as well. One factor Lori says that you should consider if you’re thinking of franchising is personality. In this area, she explains that there are procedures and rules to follow and because of this, veterans are the most successful franchisees. They are used to “following the book”. Other skills that are important are having skills that a franchisor can’t teach you. Some examples are interpersonal skills, organizational, management and priorities skills. Another big factor is being comfortable with selling. Lori says that she uses an assessment called Kolbe to show how someone reacts in situations and your innate strengths.

32:39 – 43:54 – Lori talks about marketing considerations when becoming a franchisee. She says that marketing consideration is an easy factor because one of your financial commitments to the franchisor is to pay a monthly or weekly percentage of your sales to the franchisor that goes to an advertising fund. She says that as a franchisee, you have a lot of tools for advertising and things of that nature. What you do have to consider are the financial factors. Lori also gets into the financial aspects while giving an example of franchising a restaurant. She goes into an example of the expenses such as a fee and what the money is used for as well as the start-up expenses. She also makes a point that you would need to have 3-6 months of money to live off of because money won’t generate right away. Eric also points out another important factor of looking at one’s credit score when becoming a franchise owner. Lori also talks about the process one goes through when a potential franchisee comes to her firm.

45:53 – 57:36 – Lori talks about some of her strategies in coaching and guiding her clients as well as success stories. She says that she loves the franchise model because she has had the chance to see people control their own destiny, being in charge of their own business and more. She finds it rewarding. Lori has also been able to help people migrate from another country and be able to buy businesses. She mentions a couple who were able to buy a beauty salon franchise and eventually buy other units. Loti also explains how people like these are able to build their success and are able to obtain several units. Lori and Eric also discuss any red flags in this field. Lori says to do “mystery shopping”, meaning go to several locations of a franchise that you’re interested in, seeing what your overall experience is like. Lori also tells a story of how a franchisee from one of her restaurants wasn’t complying with what food items were being served. Eric and Lori talk about how if one location makes people give a bad review, it can affect other locations that may otherwise be doing very well. You can connect with Lori through her website at Lorikarpman.com, her email at lori@lorikarpman.com, as well as Linkedin.