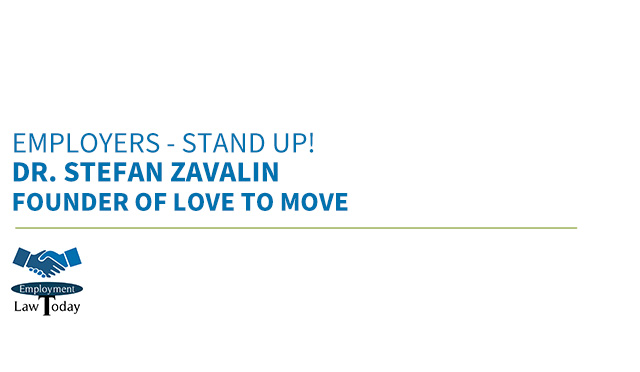 The audience will learn concrete ways for organizations to improve their ergonomics, and to change their workplace culture to a place where employees are encouraged to stand up and move more– thus improving their health, their morale, and their productivity and focus. Employers will learn the benefits to their company of implementing such changes from the sit-at-your-desk-all-day model of work.

How can reducing your employees’ prolonged sitting at work improve their physical and mental health, increase productivity for your business, raise morale, and enhance employees’ focus on their work? What shift in workplace culture must happen to make more movement, less sitting, and other ergonomics a part of your employees’ work environment?

On Tuesday, March 29 on Employment Law Today, my guest will be Dr. Stefan Zavalin, Founder of Love to Move. Want a taste of what we’ll be talking about?

00:39-17:13: Starting off tonight’s episode, Eric Sarver introduces his guest Stefan Zavalin, founder of Love to Move. Stefan gives his birthday wishes to Eric who’s birthday was on March 28! Today’s topic is about the wellness of employers and employees and the benefits of moving more and sitting less in the workplace. Stefan talks about how we didn’t realize his love for movement. Fitness worked its way into his life where he studied kinesiology. When thinking about grad school, he found physical therapy and occupational therapy as his two choices. In his first semester, he got a parasite in his eye and unfortunately lost his vision. Though, he was able to finish grad school. But his vision affected his work and was unable to help patients the way he wanted to. After going through covid himself, Stefan knew that he didn’t want to go back to desk work and this was when Love to Move came to be. Eric also asks Stefan about what factors in the workplace he believes leads to prolonged sitting and whether it’s a problem that a company should address. He says employers should care as it factors into stress, work overload, culture design and more.

19:26-36:34: Eric brings up the issue of how prolonged sitting can affect your health and wellbeing. Stefan elborates about what a prolonged day of sitting looks like. When we think about a typical workday, we usually sit about 30 minutes for breakfast, commute, in the dining room. In total, Stefan says that there’s about 7-13 hours a day of sitting. He mentions the risk of cardiovascular disease for sitting 8 hours a day as well as anxiety and depression. But he says that it doesn’t mean that it’s completely bad or unnecessary to sit during the day. Though it adds up when you think about all of the activities that we do sitting down. Stefan brings up exercise as something beneficial. He says that it’s really about habits. Eric asks Stefan how employers foster this kind of culture. He says to build the habit and then you can buy a standing desk. He says that employers can implement things like a 15 minute meeting where it is a “standing only” meeting. What’s also better is to work in groups of 10-20 people as well as ask questions to employees about what moving and standing looks like for them. This is the kind of work Stefan does with Love to Move when helping transform a work environment. Stefan also talks about the difference between encouraging and facilitating.

38:32-47:59: Stefan talks more about working on building a habit of sitting less which is possible without expensive gadgets or apps. Eric discusses more about building habits like we do when exercising rather than going straight into standing or exercising for long periods of time. Motivations and finding out what works for you is something Stefan says is important. Stefans speaks about employers finding out what connections employees have with their activities and decisions that motivate them which can benefit both the employer and employee.

49:58-57:21: Coming back from the final break, Eric asks Stefan how does Love to Move distinguish itself from other firms or organizations that stress movement and ergonomics? He says that many companies have an ergonomics team. The problem he says is that the farthest that companies will go to is the set up a standing desk and not working on habits. Stefan says that he tries to work on the culture and habit piece of this. He gives an example that if everyone in the zoom meeting is standing, it cultivates that team environment of building a habit. You can visit stefanzavalin.com where you can find his contact information like social media, learn about Love to Move and also fill out a form if you want to ask or chat with him! He also has a book called Sit Less which you can also find on his website as well as Amazon.