MERGERS & ACQUISITIONS IN THE TIME OF COVID: WHAT EMPLOYERS NEED TO KNOW. 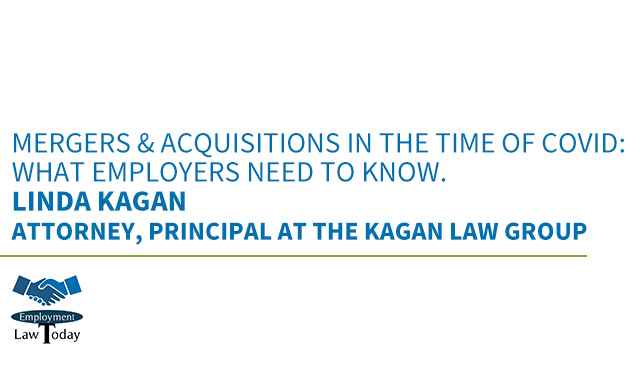 The audience will gain a better understanding of what economic, legal, and logistical considerations they ought to factor in and how they should proceed with mergers and acquisitions during the pandemic and the post-pandemic world.

It is clear that the pandemic has changed the scope of how we do business. But what about the pandemic’s impact on the world of Mergers and Acquisitions (M & A)? Does the economic uncertainty affect how a company might position itself to be acquired, bought, or sold?

Join me on Tuesday, April 12, 5 pm to 6 pm (EST), when Attorney Linda Kagan and I will discuss the above issues, and more, for an informative episode of Employment Law Today!

00:57 – 14:39: Eric introduces his guest, Attorney Linda Kagan, founder of The Kagan Law Group. Kagan and her group handle business transactions and contracts. Prior to starting her own law firm, Kagan has had experience in working in places like Jones Day, one of the biggest law firms in the U.S. Kagan says that when she first wanted to become a lawyer, she was 7 years old. During that time, the civil right era was one of the main topics as well as the Vietnam War which was all over tv. She felt that being an attorney would be a great way to make a difference. She was inspired to make a difference and take part in change. She describes business law as a blend of real life business and law as “in the background” and to make sure of things like clients being protected and to also anticipate things like loopholes and other issues that include litigation. Eric makes a point that people might forget that even in business law, “there are many wrongs to be righted.” When it comes to mergers and acquisitions (M & A), Kagan says that in the past two years, the quality and perspectives have changed for business owners because of how the pandemic has affected their choices.

16:54 – 33:49: Eric asks Kagan about whether the economic uncertainty of covid19 affects or impacts how a company might position themselves to be acquired, bought, or sold. She mentions that even the war in Ukraine along with the pandemic have created change moment by moment. She explains that when she is representing someone who is buying or acquiring a company, they’ll look at least the past 3 years to see the revenue flow, expenses, and more. Currently, Kagan says doing this would be very different especially since the past 2 to 3 years have been very different. She discusses an example of what owners and buyers should do and mentions that owners should be creative and find ways to stay afloat as they look to sell assets or the whole company. Eric and Kagan also talk about non compete clauses and sweat equity agreement and how it’s changing now especially with remote work. Kagan mentions that adding something like a non-compete clause can make businesses suffer in that it’s harder for them to find the people they need.

35:54 – 46:56: Eric talks with Kagan more about legal considerations and business considerations when looking into buying a company during this time. Kagan says that the legal considerations have to do with employment contracts, limitations and clauses as they mentioned before. She speaks about considerations that both buyers and sellers should consider. One point she mentions is that you have to look at predeal due diligence. This part verifies the financial information of a company like tax returns and its other activities. You don’t want to be responsible for past tax obligations for instance. She talks about how detailed it is to focus on M & A which is why people hire attorneys like Kagan. She also mentions considering whether the existing assets of a company can expand the revenue base. Also look at things for yourself like having a US trademark filed. She makes the point of finding what value you can put into the process and after when buying or acquiring.

48:25 – 57:50: In the final segment, Eric discusses more with Kagan about her list of considerations. She mentions a tax analysis. Kagan also mentions how one of the kinds of work she does is creating licenses for clients in the business world. She says that the financial analysis is a big part to consider. Eric and Kagan make the point of disclosing and resolving agreements and issues when either buying or selling which is also why it’s important to hire a lawyer. Before closing the show, Eric asks Kagan how she distinguishes herself from other M & A transaction firms. She answers saying that her ability to be more insightful into the projects and cases her firm takes on. She also mentions having the constant focus on the needs of businesses whether they are drafting a new agreement, suing another party or filing a trademark. She is also doing more mediation. You can learn more about Attorney Linda Kagan and her firm at thekaganlawgroup.com, she is also on Linkedin, and her email is lkagan@thekaganlawgroup.com.