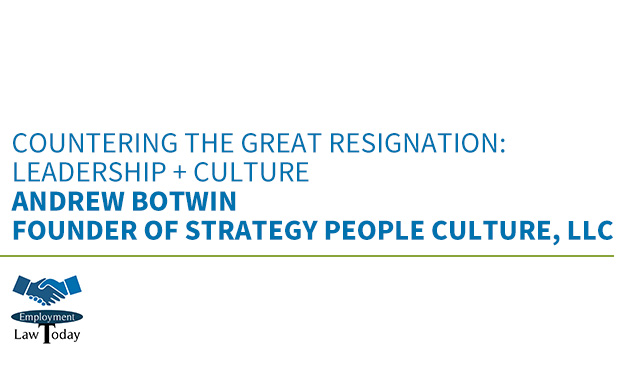 The audience will learn how executive leadership coaching/improvement, when combined with a focus on improving strategy and workplace culture, can enhance employee morale, reduce resignations, and lower the risk of liability from disgruntled employees’ lawsuits. The audience will also learn the benefits of understanding how to improve workplace culture and minimize conflicts due to implicit bias or discrimination.

Too often, the conversation around mass resignations and employee burnout focus solely on the employee – on uncovering the root of their dissatisfaction and seeking to boost their morale. While this is a valuable and necessary point of focus, there is another key component to countering The Great Resignation and reducing employee turnover: improving the leadership style and management methods of executives and high-level supervisors.

On Tuesday, May 3rd, join me and my guest, Andrew Botwin, Esq, SPHR, SHRM-SCP, PCC, MBA, Founder of Strategy People Culture, LLC, for a frank discussion of these timely topics!

00:43 – 14:01: Starting off the show, Eric introduces today’s topic of discussion and his guest, Andy Botwin, founder of Strategy People Culture. Andrew was an auditor for a big accounting firm, Arthur Andersen, while in college. He did not like his experience as he felt like he wasn’t mature enough and ready to be in that environment. He moved onto a different firm where he worked on various kinds of recruiting and getting involved in other operations for almost 5 years. He then went back into public accounting working in the role of human resources manager for a regional firm that was growing. In this firm, as ,mcha as they were growing even with the amount of employees in the firm, there was also as much of a turnover of up to 40 percent. After twelve years of being a part of this team, he was inspired to overcome the concept of that if a business is doing great, there is no need to change. This was where Strategy People Culture came about. Eric and Andy also discuss retention and the importance of what it means other than whether employees will ultimately leave a business.

16:00 – 29:01: Eric asks Andy about what are some root causes of the great resignation. Andrew says that he hears most people talk about issues related to Covid-19 and the demand of the workforce for employees to work more fluidly. He also mentions baby boomers who are now at a point where now with Covid19 and the changes with time, are now staying retired at an unproportioned rate. Andy also mentions inflation with things like cars for example. He says that people are making different decisions about where and how they are working because of issues like these. Andy also mentions things like lost communication because many people have worked remotely at this point and emails, phone calls and other forms of media can get lost whereas in the past, you could stop and ask a quick question meeting someone in the hallway. All kinds of factors have affected the great resignation. He also discusses with Eric about implicit bias and its relation to the great resignation.

31:07 – 45:51: Eric talks with Andy about his approach on employee satisfaction. Andy goes back to mentioning the idea of having one direction and a solution to a problem. He gives the example of “if we have pizza on Fridays, that’s going to make people happy.” He mentions that those things mean something to people, but they don’t have deep meaning and are not creating something sustainable. He says that leaders, by definition, get people to follow them. When talking about implicit bias, discrimination and sexual harassments, something that he trains and informs his clients about, he says that there is a lot of situations where if a person was more of an effective leader, respected for how they tried to lead their team, any off-putting comments of actions can be looked away and given the benefit of the doubt. If it’s a leader that employees don’t respect, in this situation, it can be interpreted in a negative way. This can lead to employee turnover, financial loss and more. There’s a wide middle ground where for the more respected leader, employees may feel more comfortable to speak up if something bothered them, harmed them, or offended them. Andy also discusses coaching executive leaders and what his method is to helping others.

47:51 – 57:24: In the final segment, Eric asks Andy about how he and his firm distinguish themselves from other firms in the diversity, HR and coaching field. Andy says that what’s important in coaching is fit. It’s not just about getting the client. The goals are very specific to an individual. He says that they thrive in understanding goals and allow for adaptation for every individual. Coaching is about expanding our minds and thought process and there are many possibilities in decision making. He goes back to mentioning the great resignation and how there isn’t one answer or just one solution. He works with leaders to understand their individual goals and collective goals as an organization. You can find Andy Botwin at strategypeopleculture.com and andy@strategypeopleculture.com.